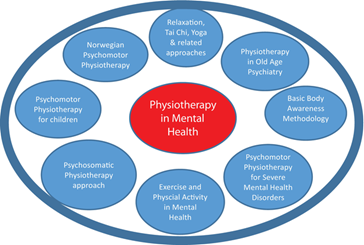 Role of Physiotherapy in Improving Mental Health Mental disorders comprise a broad range of problems. They are generally characterized by the combination of abnormal thoughts, emotions, their behavior and relationships with others. Disorders include schizophrenia, depression, intellectual disabilities and other disorders due to drug abuse. People with mental illness like depression, schizophrenia and bipolar disorder often have a poor physical health and experience a significant psychiatric , social and cognitive disability. Physiotherapists have also a key and important role in the treatment of patients with schizophrenia and their interventions may have a broad spectrum of benefits for the patients. In general, physiotherapists are the physical health experts providing an important bridge between the physical and mental health in patients with schizophrenia. Promoting and encouraging the physical activity is central to the physiotherapist’s role in treating the individuals with sc
Post a Comment
Read more 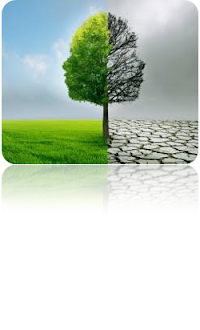 Facts about Bipolar Disorder Bipolardisorder is one of the most misunderstood mental health conditions in today’s world. It is a mental illness marked by the extreme shifts in their mood. Symptoms mostly include an extremely elevated mood called mania which also includes episodes of depression . Bipolar disorder is also called as bipolar disease or manic depression. People with this disorder may have trouble managing their everyday life tasks. ·   Bipolar disorder is a mental illness that is characterized by some dramatic shifts in mood and behavior. ·       Bipolar depressive episodes tend to look a lot like some classic depression ·       Manic cases are more complicated than simply being up ·       Hypomania may involve many of the same symptoms of mania but on a less of severe scale ·       People can experience symptoms of mania and also depression at the same time ·      There are several types of bipolar disorder ·      The length of these mood episodes can vary from one pe
Post a Comment
Read more

When Do Mental Powers Peak?

When Do Mental Powers Peak? According to some study, researchers suggests that most of the human brains takes about 25 years to get developed, though these rates may vary among men and women, and among the individuals. Although the human brain matures in the size during adolescence, important developments within the prefrontal cortex and the other regions still take place well into one's 20s. Many might say that the 18th birthday marks the transition from our childhood to adulthood. After all, that is the age at which people can typically join the military and become fully independent in the eyes of the law. But in the light of research showing how our brains develop gradually over the course of several decades, and at different paces among individuals, should we start rethinking how we categorize children and adults? ·          18-19: Information-processing speed peaks early, then immediately begins to decline. ·          25: Short-term memory gets better until around age 25. It
Post a Comment
Read more 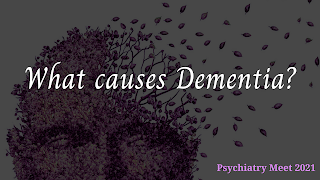 What causes Dementia? Dementia is generally a loss of thinking ability, memory, and other mental abilities . About 5%-8% of adults over the age 65 have some form of dementia issue. This percentage may double for every 5 years after the age of 65 as many as half of people in their 80s have some dementia. The most common causes of dementia include: ·   Degenerative neurological diseases as it include Alzheimer's disease, Parkinson's disease, Huntington's disease, and some other types of multiple sclerosis. These diseases get worse over time. ·         Vascular disorders. These conditions affect the blood circulation in your brain. ·         Traumatic brain injuries caused by the car accidents, falls, concussions, etc. ·          Infections of the central nervous system. These include meningitis, HIV, and Creutzfeldt-Jakob disease. ·          Long-time alcohol or drug use ·          Certain types of hydrocephalus, a buildup of fluid in the brain Certain phys
Post a Comment
Read more

How food affects our Brain? The connection between diet and the emotions stems from a close relationship between our brain and our gastrointestinal tract which is often called as the “second brain.” Eating healthy food promotes the growth of “good” bacteria, which in turns positively affects the neurotransmitter production. A steady diet of some junk food can cause inflammation that hampers the production. When neurotransmitter production is in good shape, your brain receives these certain positive messages loud and clear, and your emotions will reflect it. But when the production goes awry, so might your mood. Sugar and processed foods can also leads to the inflammation throughout the body and brain, which may result to mood disorders, including anxiety and depression . In order to boost your mental health it is considered important to focus on eating plenty of fruits and vegetables along with the foods rich in omega-3 fatty acids, such as salmon. Dark green leafy vegetables in particular are the brain prot
Post a Comment
Read more